And here we are my first two pieces and first inspiration.

This inspiration has been a learning curve for me and brought with it a huge realization on many fronts. Firstly I have learnt that it’s much harder than I thought to find the odd five minutes here and there for hobbies when you have a 1-year-old. And the odd five minutes here and there don’t lend to very much creatively and doing it this way means a not so great drawing that took maybe an hour in total max took forever to finish. But what really hit me was holly cow are my drawing skills rusty!!!!!!
And it is that realization that hit me the most. I’m not sure which had more of an effect, the former or the later. But one thing I’m sure about, is that I’m not very impressed with the results.
I thought I was capable of better. But hopefully as this project progresses my skills will improve….I hope.

Anyway enough digressing and back to the real purpose of this blog. This posts inspiration and what resulted from it.

This weeks post is brought to you by the letter S. Specifically my beautiful daughter S. My never-ending source of inspiration and muse who has motivated me to do many things. Such as cook. My husband and anyone who knows me will tell you I don’t cook very often. There are very good reasons behind that. Mostly it’s not something I even average on except for one or two things. But yet at the 6 month mark I was hell-bent on making my own baby food. And then just recently S was part motivation for this entire drawing project. And I don’t mean just this weeks post. I mean the whole thing. I want to be able to show her the many facets of mummy and foster a creative environment for her to grow up in. And to do that I need to actually do the things I love and enjoy and not just say I can do them.
Every day S does something inspiring and new. Yesterday she showed us that just because we think she’s a little too short to reach something doesn’t mean she won’t courtesy of her new “stand on tippy toes skills”. She’s getting closer and closer to walking properly every day and just yesterday I caught her dancing somewhat…well butt shuffling in a bad rhythm to Choo Choo Soul while in her high chair. There’s always something new to wrap my head around and I’m still trying to process that it’s already been over a year since we brought her home. My baby is growing up! And fast!
We’ve been snap happy taking millions of pictures for the memory banks and got as many videos as she would let us catching her doing the latest “cute new thing”. So why now immortalized some our memories in pen and pencil? Is it not appropriate that my motivation be my first inspiration?
Well lets look at the results.

This is my first piece. It’s coloring pencil on paper. 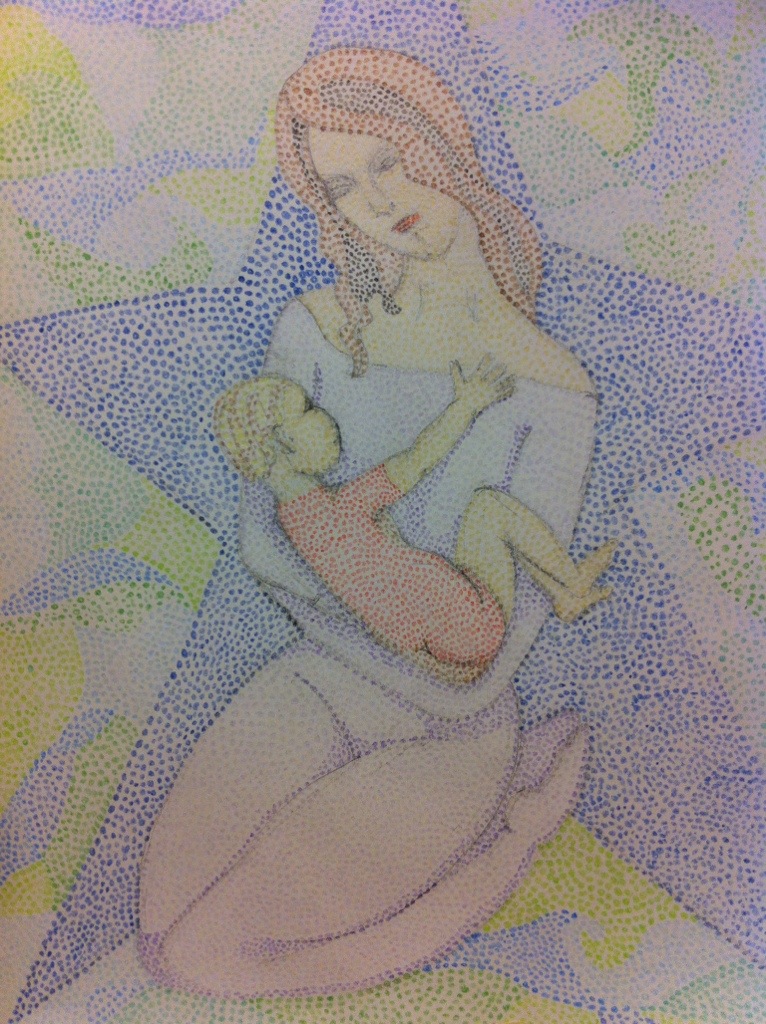 I took inspiration from pointillism for style. Purely for fun. I do like how it looks like a mosaic almost.
And here’s a close up. 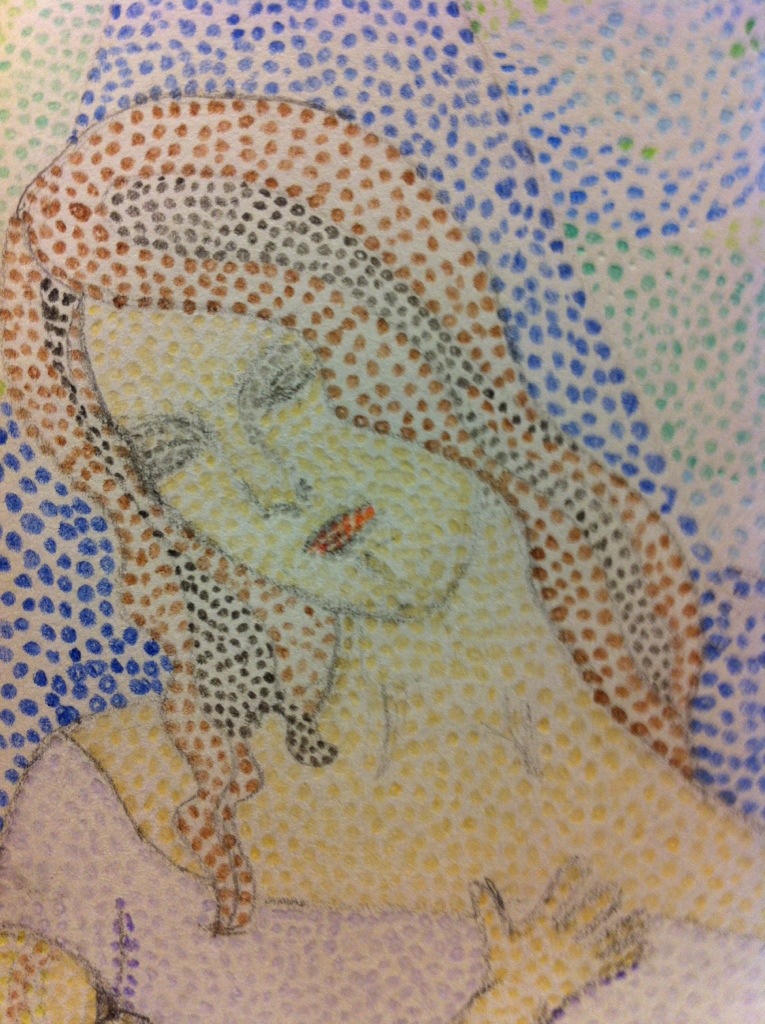 Close up of drawing number one.

You can see in the close up how I did the dots. 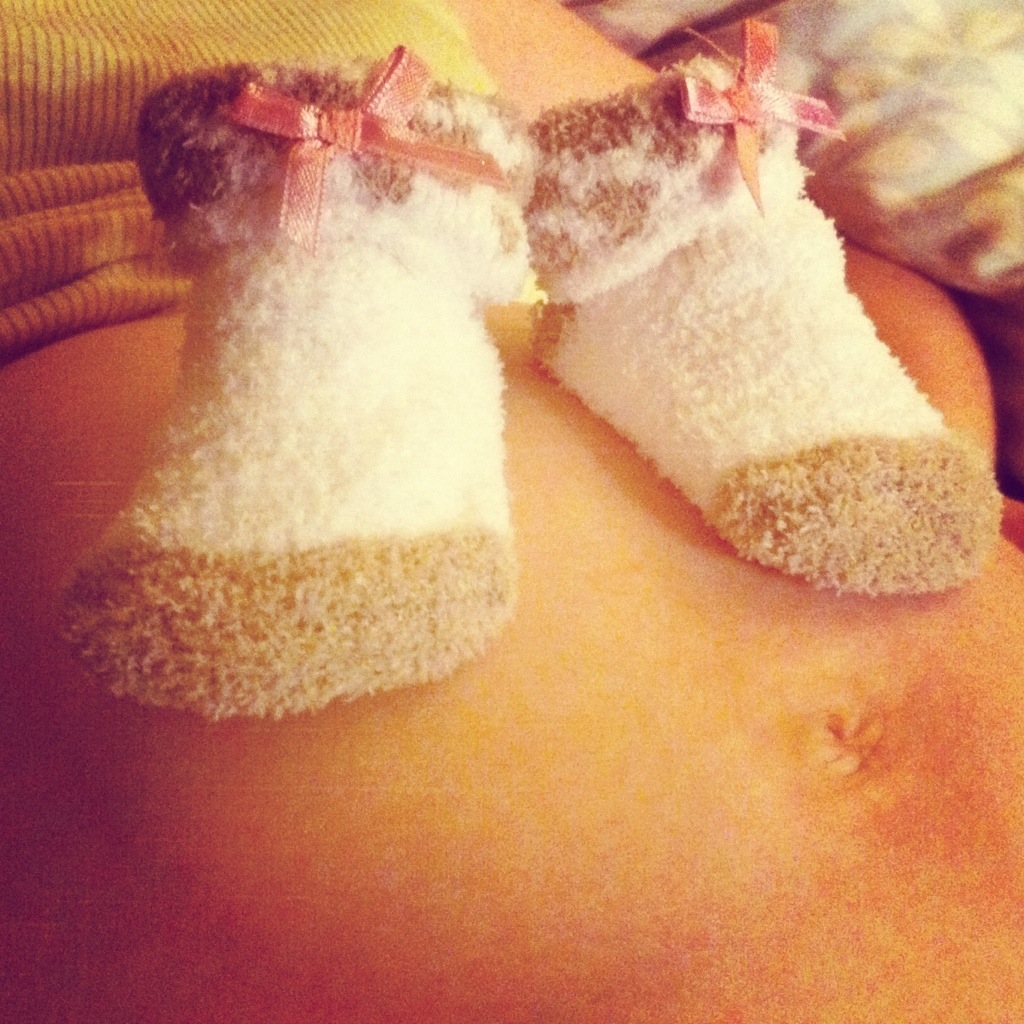 You may be wondering “what’s with the big star?”. Well it’s to signify S’s name. It is “star” although not in English. It seemed appropriate as she is our little twinkle and I’d wish for her upon a star any day. That and we were searching for a beautiful girls name to represent my heritage as she has V’s surname which makes his (or at least part of) very obvious. It was beautiful and not too difficult for an American tongue to pronounce although many still miss-hear it. And bonus was it is very rarely heard of over here. Which is something we wanted as well. Something unique but meaningful to who she is. 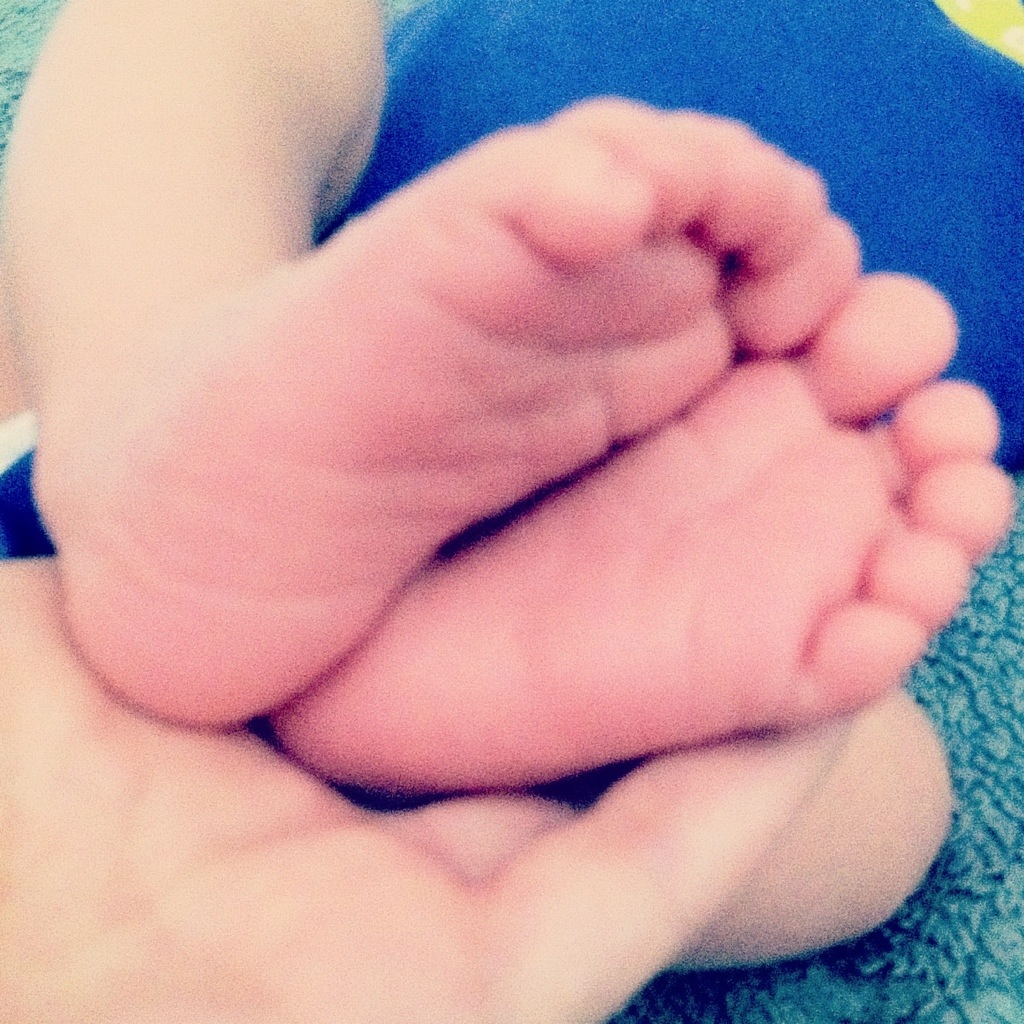 Like any mother I have the obligatory thousands of photos. In fact I think I hit well over a thousand by the time S was six months old. When I sat down to start drawing for this post, I looked at the many I have on my phone (don’t you love the technology of today? You can’t fit that many photos in your wallet!), and thought about in what way I wanted to represent my little muse on paper. I knew I wanted to represent my love for her and our bond most of all. Before and after she was born. Had I found more opportunity to concentrate on my drawings, I think I would have ventured more into conveying who S is. Her personality, her loves, and likes. Just generally what its like to live with S. I truly do feel so lucky to be able to call myself her mum and claim her as mine, well ours.

But that’s enough gushing. As I said earlier I did do two drawings. The second one (shown bellow) was done in pencil and black pen. This drawing I was aiming for was a picture to convey what impending motherhood felt like for me and how I feel about it now. Waiting for S to finish cooking and greet us in the big wide world. Again I’m not that impressed with how it turned out. It was pretty rushed and more worthy of the title doodle than drawing. 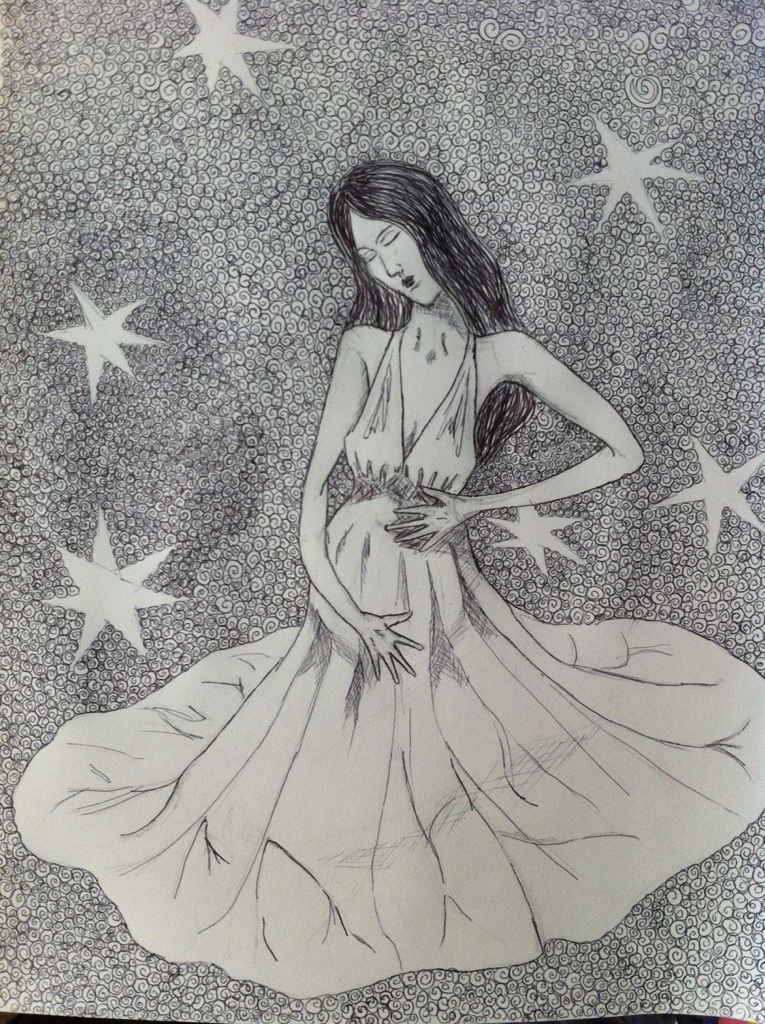 And a close up of drawing number two. I did swirls for the sky instead of dots like before. The swirls were strangely relaxing to do. Must have been the monotony. Although not as neat as I’d have liked due to me rushing it. 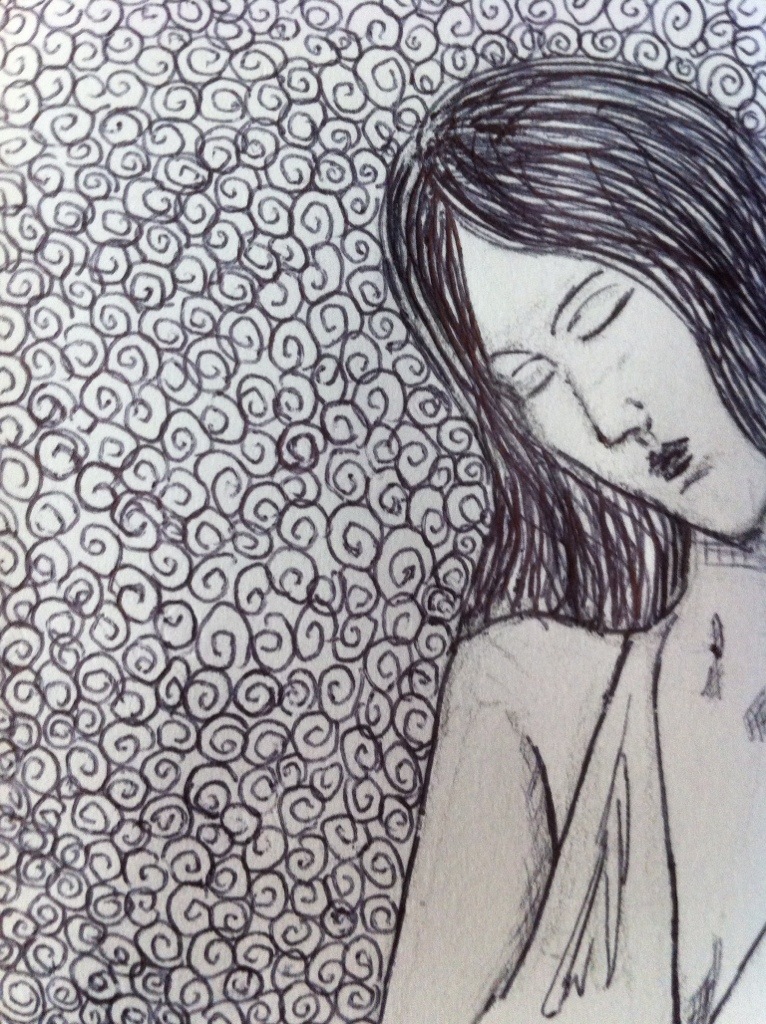 Close up of drawing number two.

And I guess that concludes my first inspiration post. I’ll leave you to mull on what you have seen and read. While I go off to draw some more (hopefully with improvement) for a new post.